Happy weekend!!  This week felt super long after Thanksgiving break.  I was glad to get back on track with my intervention kiddos, though.  Honestly, I was a little worried they’d backtrack during their week off, but it seems like they all read the books I’d given them to take home, and a few of my kids are doing even better than they were before break!

This week I started something new with my first grade group – post-reading summarizing slips.  We worked on orally summarizing for almost all of November, but it was always hard to get all 3 of my students to participate equally to come up with the oral summary.  I really wanted to know how each child would do individually with summarizing.  Plus, moving forward, I wanted to have them write more often during our group.  So I decided to create summary slips.  After a child reads a text (actually – it is a reread from the previous day), he/she fills out the summary slip and also circles whether the text is fiction or nonfiction.  Not only does this help with the dilemma of kids finishing the reread at different times, but it will also give me some quick, collectable data about their progress.  You can click on either of the pictures below to download for free (both English & Spanish are included).  They are half sheets, but you could also staple multiple copies together to make a little booklet for each of your students. 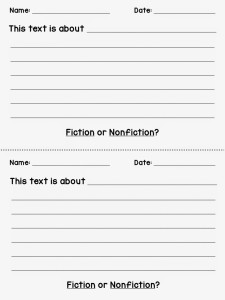 If you’ve read my previous weekly posts, you might remember that I work with a group of 2nd graders who are very low – they began the year as nonreaders.  They are still very low, and so our group time is actually a series of individual reading conferences in which I work with each student one-on-one.  On Monday, our first day back after Thanksgiving, I asked the boys to write about what they did over break.  I modeled what I expected and wasn’t really asking for anything difficult or out of the ordinary.  But when one of my boys sat down to write, he could not come up with anything.  He did write down two letters, but I don’t think he planned a sentence or really knew what he was trying to say.  I was pretty surprised that he has gotten to 2nd grade without being able to independently write one sentence.  Anyway, when it was his turn to read with me, I scrapped my plans for introducing a new book and instead worked with him on how to plan and write a sentence.  One strategy that he was familiar with (and that he likes) is to write a line for each word.  So I included that in my instruction, and with a little prompting, he was able to plan and write a 3-word sentence.

Since I want to incorporate more writing into intervention time, I really need him to be able to plan and write sentences independently.  So, I made this visual guide for him to use (both in intervention and in the classroom) and am helping him practice. 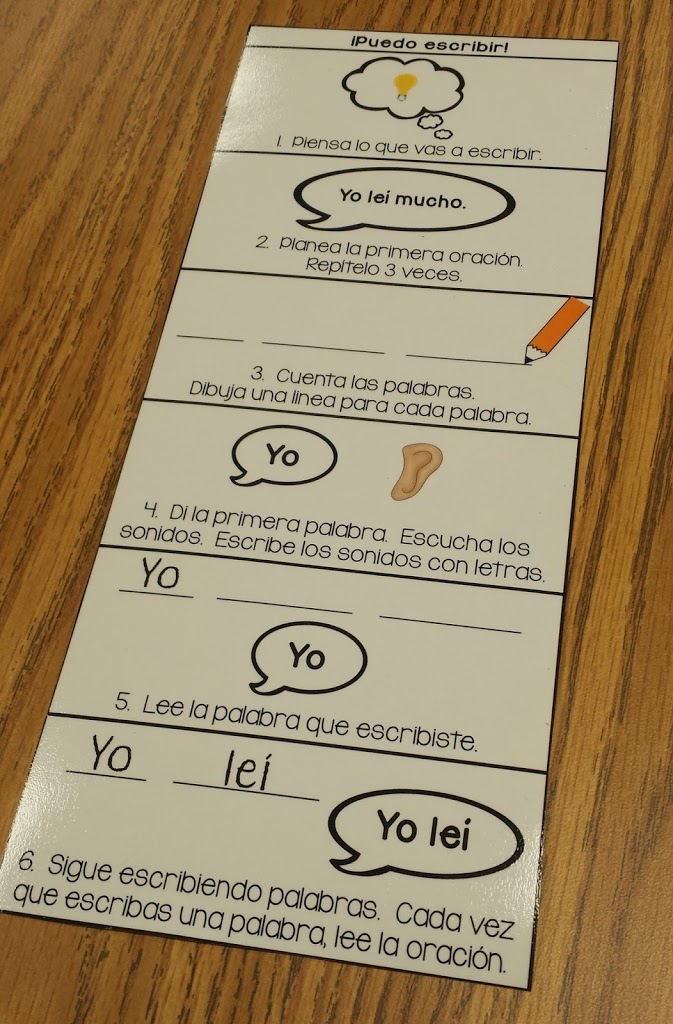 If you want to download the visual guide, just click on one of the images below.  Again, I have it in both English and Spanish for you.  It’s very basic, so it’s probably best for average Kinders and 1st graders, or struggling 2nd graders/above.  If you decide to use it, let me know how it goes! 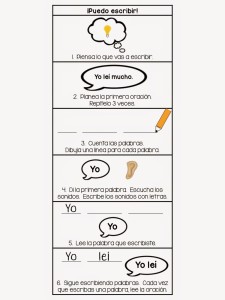 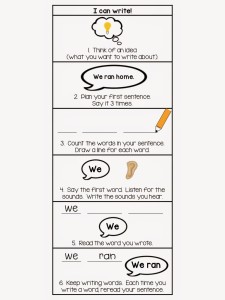 That’s all for now!  Have a wonderful weekend!!

Subscribe
wpDiscuz
Heads up! This site uses cookies to ensure you have the best experience possible. If you continue to use this site, we will assume that you accept this.OkPrivacy policy